With a guided tour, this year AMF proposes itineraries to discover Bologna and the places where the Alma Mater was born and raised, from the historical ones to the more recent ones: a journey through arcades, palaces, buildings and renovations.

During the Alma Mater Fest, the University of Bologna organises two guided tours in English for international students who want to explore their new university. You will learn about Unibo's story through the squares, streets, and porticoes of Bologna.

Piazza del Nettuno is the ideal starting point of this guided tour. There you will have a view over the various locations of the medieval "Studium" of the University: Via d'Azeglio, the Cattedrale di San Pietro (St. Peter’s Cathedral), the crenellated Palazzo dei Notai. Finally, from Piazza Maggiore, you will also see Palazzo D'Accursio (Accursio Palace), which still bears the name of the famous professor and jurist d’Accursio and hosts the City Hall.

We will then move on to the Archiginnasio, the first official seat of the University of Bologna. Here, you will see the coats of arms painted on the walls recalling the international prestige and vocation that the Alma Mater has had since its early years....

Strolling under the Portico della Morte (Portico of Death) towards the Palazzo della Mercanzia, you will experience the typical Bolognese atmosphere of the 'Quadrilatero' (Quadrilateral) with traditional workshops and taverns.

Finally, the Due Torri (Two Towers) will guide you to Via Zamboni, the beating heart of the modern University. Ancient buildings such as Palazzo Malvezzi-Campeggi and Palazzo Poggi are the new seats of the University. They are connected to each other and to the rest of the city by the magnificent porticoes, recently classified as a World Heritage Site.

Tours are organised in collaboration with Unibocultura and booking is mandatory. Tours will take place on Monday 11th of October at 11:00 and 17:00, starting point is Piazza Maggiore - registrations will open soon. 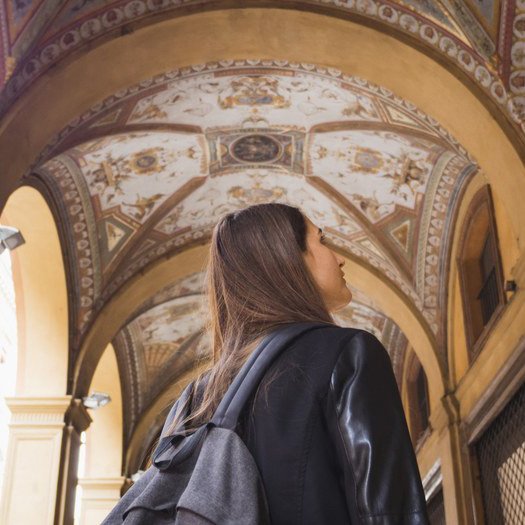